Do you know what is better than Halloween? Halloween parties, of course! Just be sure to find a space for your party, and cover it with tissue paper, stretched cotton, and cardboard cut-outs of the ~spooky~ beings that roam the night. Also, be sure to prepare blood red punches and Halloween finger food. Plus points if they really look like disembodied fingers. Negative points if they are really fingers. Remember, WillyWonka said that “Cannibalism, my dear children, is in fact frowned upon in most societies.”

Now, you almost have the best Halloween party, but it is still missing something. Do you know what it is? If you have guessed Halloween games, then you are right! (If you guessed wrong, better luck next time, pal. We all have our bad days.)

Here I will present to you a compilation of fun (and ~spooky~) Halloween party games for kids. 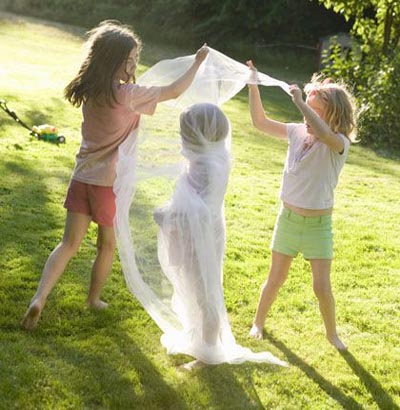 In this Halloween game, you just need a white crepe paper, tissue paper, or fabric (although tissue paper works best), plus any fun Halloween songs.

Instruct everyone to find a pair, and give each pair a roll of tissue paper. When the music plays, one of them should wrap the other in tissue, mummy style. Instruct them to not put any wrapping on the head, and to separate the wrapping of the arms from the torso. When the music ends, the ‘mummy’ should hop towards the finish line while ensuring that the wrap stays on them. The first one to reach the finish line wins. 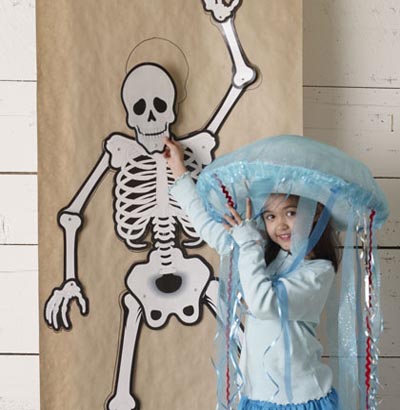 In this party game, you’ll need a cardboard cut-out of a skeleton, a large paper to paste it into, a marker, and some tape.

Do this before the party starts! First, trace the outline of the cardboard cut-out, then dismantle the bones of the skeleton. Now, scatter the bones into different areas of the venue.

Now, when the party starts, ask them to help you fix Mr. Skeleton. (Or Ms. We just don’t know.) 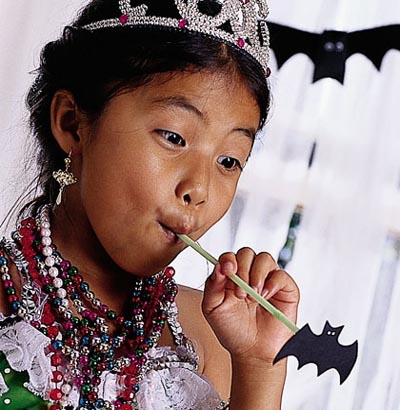 In this Halloween party game, you need straws, construction papers, and two bowl.

Before the party, cut-out ~spooky~ beings. Your pick on what kind of ~spooky~ being you want. It could be bats, deranged pumpkins, ghouls, your ex-boyfriend’s picture, whatever! When you are done, divide the ~spooky~ beings into two starting bowls. Place another two bowls on the other end of the room.

Now, this is your classic relay game. The instruction is to suction a ~spooky~ being and to transfer it from the starting bowl to the finish bowl. The first one (or, team) to transfer all the ~spooky~ beings wins! 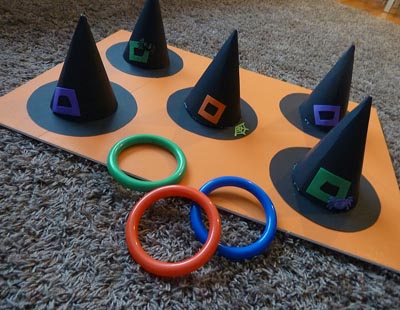 To set up this game, you need a piece of cardboard, party hats, black paint, and toss rings.

Just cut circles big enough to insert the party hats. Draw a circle around each party hats. This will be the bottom of the witch hat. Also, make sure to color the party hats black. Just allow the paint to dry, and your party now has a toss game! 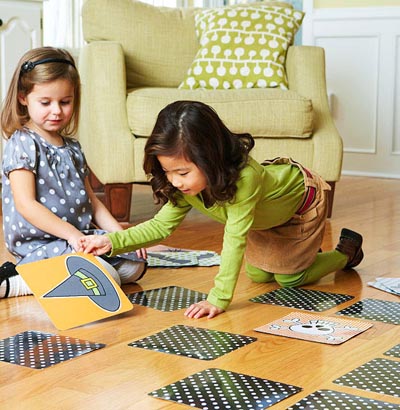 In this game, you need cut-outs of ~spooky~ things, two copies each. Paste each picture on flash cards. Set-it up on the floor, and watch the search for ~spooky~ pairs.

Pin the Tail on the Cat 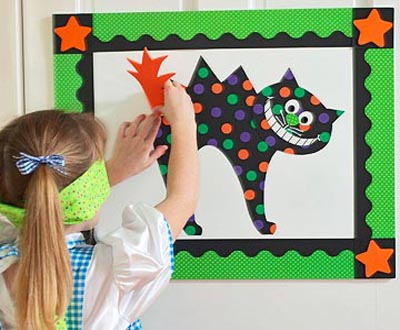 Here, you need a cat cut-out (minus the tail). Make the tail of the cut out of foam board and put a double sided tape on it.

During the game, have one of the kids blindfolded, make them turn around ten times, and watch as the audience instructs them on how to pin the tail on the cat.

Learn more about Pin the Tail from BHG.com 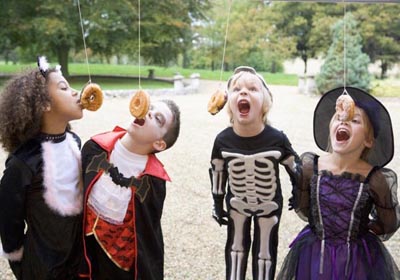 Now, this is a good alternative than just giving candies to the kiddies when they go trick-or-treating. Hang some donuts using some yarn some clothes hanger or a rod, and when the kids knock on your door, tell them that they will play a game. Hang the clothes hanger or the rod on the doorframe (just make sure to install some hooks on your doorframe so the rod won’t fall on the poor kiddies’ faces) and watch the kids gobble up their donuts. Just instruct them to not use their hands.

Learn more about this Halloween Party Games for Kids on easyday.snydle.com 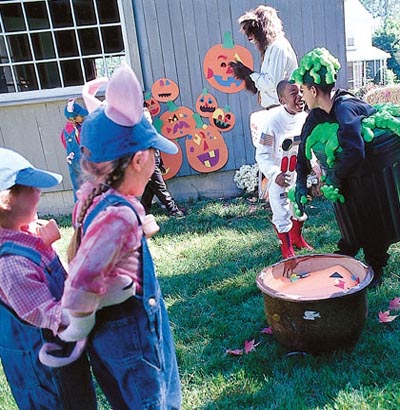 In this game, you have to prepare pumpkins of various shapes using orange construction paper (or you could use other colors as well. Your choice. I certainly want to see a cookies n’ cream flavored pumpkin.) Also, prepare enough eyes, noses, and mouths to go with all of the pumpkins. Then, pin the pumpkins onto a wall.

To play this game, ask the kiddies to glue each pumpkin with a pair of eyes, a nose, and a mouth. But they could glue it however they want. Hey, we don’t want to mess with their creativity now, do we?

Learn more about Mix and Match Game from Spoonful.com 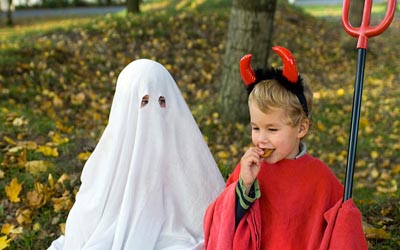 Ask the kids to pick an It, and have this It blindfolded. Instruct the other kids to form a circle, and place the It in the middle of the circle. Then, play some ~spooky~ music. While the music plays, the kids will circle around the It, and when the music stops, ask the It to reach out and touch the kid in front of him, and the kid that the It touched should let out a ghostly sound. (It could be the standard ‘Boo!’ or something like ‘I’m a ghooooooost~ A scary ghooooost~’ Just let the kids’ imagination run wild.) The It then will have to guess who the ghost is. If the It’s guess is correct, then the ghost will be the new It. If not, then he’ll still be the It for the next round.

Pin the Stem on the Pumpkin 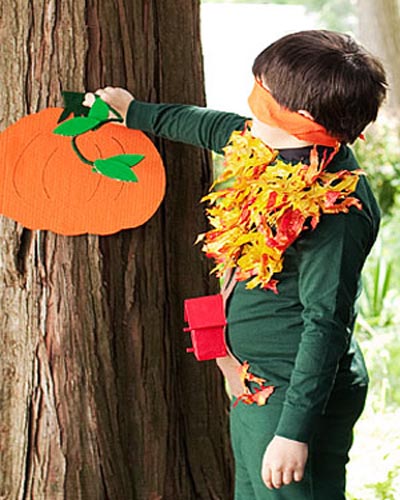 The steps on how to construct this game is the same as in #6. Just make sure that you cut a leaf out of the foam, not a cat’s tail. Pinning a cat’s tail on a pumpkin would be silly. (What would that be called, though? Pumptail?Tailkin?Catkin?)

Learn more about Pin the Stem from Womansday

It is exactly what it says on tin. Give the kids a word that is related to Halloween, like Jack-o-lantern, scarecrow, or even Halloween itself, and ask them to list the words that could be made from the given word. The kid who lists the most number of words would be the winner. The prize? Candy, of course! 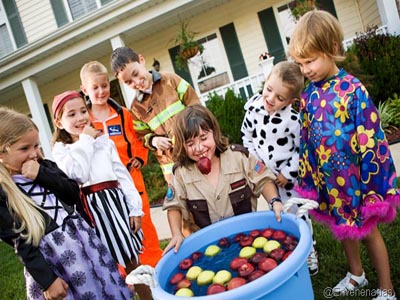 This is a classic game. Just fill a tub with water and fill it with apples. Now, ask the kids to line-up, and each one will get a chance to bob for an apple. You can give it a twist by saying that everyone who catches an apple will get to marry, or those who are not able to get any apples will be visited by Sadako at night. Your pick. Just don’t scare the kids too much. 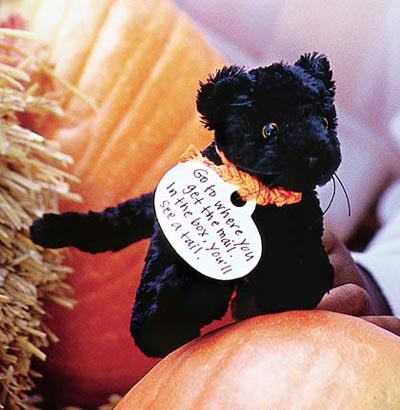 Of course no Halloween would be complete without talks about the Salem Witch Trials. In this game, you have to hide a treasure (which of course will be candy). But instead of normal treasure maps, your clues will be written on cardboard cut-outs of black cats or black cat stuffed toy with a clue tied to it. The guests will have to follow the cat’s trail to find the treasure. 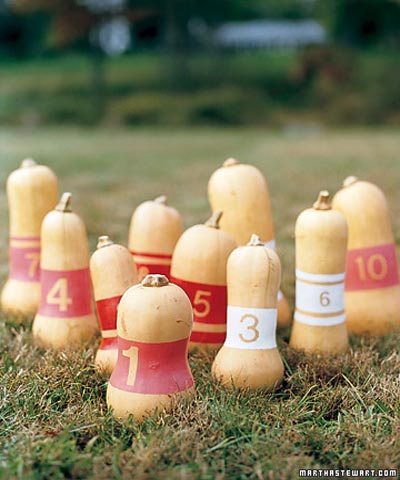 Make the pins by sticking vinyl tapes around the squashes. This is to make no acrylic paint will touch your squashes. Just in case that you are still planning to eat the later.
Paint over the vinyl to number your pins. Then, arrange your pins. A pumpkin will be your bowling ball on this game.

Of course this is a game that we all know from the movie The Conjuring. And whether you believe it or not, this game is really fun to play!

You need to select an It among the players, and have them blindfolded. The other players will then go to their hiding spots while the It is spinning around. After the tenth spin, the It will now search for the other players. The It will have to locate the other players through claps. Just be sure to stay away from haunted closets though.

With that note, I am going to end the blog post here. I hope that you will enjoy that games that I suggested here. Pro tip: Do not say ‘Let’s play a game’ while wearing a mask. It will give everyone an aneurysm.